We're told Ryse is designed to be Microsoft's new Gears of War / Halo mega launch title. It's set in the roman empire period and uses deep Kinect integration to allow a player to slash and kick at enemies. We understand that Ryse will take advantage of the new body tracking improvements in the next Kinect sensor. Ryse is part of four major launch titles for the next-generation Xbox. Sources tell us that a new Forza title with "super life-like" graphics will also be made available at launch, alongside a zombie game and a family game set on an island with Pixar movie-style graphics. We're told that the family game will utilize Kinect to scan a body and generate a virtual character in the game.
Zum Vergrößern anklicken.... 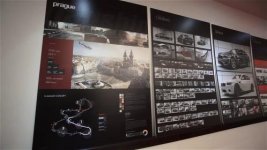 Forza 5: An Xbox One Game Ten Years in the Making - GameSpot.com
TE

Interviewer: Thank you for giving the Forza racing community some of your time today. I think I can safely say that this is welcome and exciting news to everyone on the racing side of the Forza franchise.

Dan: Oh, no problem, my pleasure.

Interviewer: So, what took you so long? (laughing) I mean how is it that this may well be the first time you have directly addressed the Forza racing community in 5 iterations of the game?

Dan: (laughing) Uh, well, that’s not exactly the way we see it. We don’t give interviews to the leaders or fans of specific segments of our game as a rule. We haven’t given any interviews to just those in our painting community, or drifting community, which are arguably larger participation groups than what we have in our hardcore racing community. From my view as a game developer we don’t see the hard-line segregation or divisions that I know many in our community tend to see. So for example, we’ve never tried to dictate, guide, or limit what our fans want to do with Forza.

Interviewer: Fair enough. So without a specific vision of what the Forza franchise should generally be, that is, without a specific direction from Turn 10, do you run the risk of being the Jack of all trades, and the master of none in the car simulation genre?

Dan: (laughing) Not at all. We see Forza as being the master of everything offered by any simulation car game available anywhere, whether on a console or PC. Forza stands alone in our opinion because it offers so much more at such a higher level than anything else out there.

Interviewer: I see. Your critics say, that Turn 10 studios, and you specifically, do not entertain those who would be critical of Forza. Going through the records we couldn’t find any hard hitting interviews that offered any constructive criticism of the game before during or after a new release. Is there a reason why you don’t want to address your critics, and would you mind if we took a few shots at you?

Dan: (laughing) I give interviews to every accredited press person I can find in our industry, and I think they do their best to squeeze every morsel of new information out of me they can. You know, the subject matter is, you know, that of a game, it’s not politics or anything; it’s about fun, fun in any of the many ways that you the gamer see fit. So, you’re not usually going to have a lot of tough interviews about having fun I don’t think. So, yeah, go ahead, give me your best shot, or (laughing) shots.

Interviewer: Thanks, we appreciate a gamer who has some game. Considering the intensity of the Forza racing community and racing fans in general, and the success of your competitors Gran Turismo 5 and iRacing, with their heavy emphasis on racing, why doesn’t FM5 follow suit? What is it about the popularity of dedicated simulation racing that you don’t like to try to compete with?

Dan: That’s a rather odd question from my point of view, and here’s why. We really do feel that we’ve covered the bases not just with racing but all aspects of car culture. So, it’s very hard to compare our product to any of the others when they don’t rise to our same level of options and playability. It’s sort of like trying to compare apples to oranges I guess.

Interviewer: So are you saying that there is no room for improvements in the way Forza races, no reason to consider the advances and popularity of your competitors?

Dan: No, we do take a look at what others are doing; it’s just that we prefer a more balanced and broader approach to the genre. We just don’t see Forza as a hardcore narrowly focused simulation racer; we are much more than this.

Interviewer: So what do you say to people who see Forza as simulation-lite, and lacking many of the most basic racing functions and features?

Dan: Well, everyone has their opinions of course, and that’s really part of what Forza is all about. It’s about creating those opinions, which serve to fuel the passion of the genre. I’m not really aware of any basic racing features or options absent from Forza. Can you name some?

Dan: Um, I think we do have most of those features in some form. You know, it’s one of those things where we’d like to have every good idea there is, but we have to draw lines too, otherwise we might take 5 years to produce the next version.

Interviewer: Is that a shot at Polyphony?

Interviewer: Speaking of Polyphony and Kazunori Yamauchi’s Gran Turismo, what do you think of his efforts to blur the line between simulation racers and real racers with their wildly popular GT Acadamy contests, and would you ever be willing or interested in doing something similar?

Dan: It’s an interesting effort, and to be honest one that never crossed our minds. I don’t know that we would ever be attracted to doing something like that now that it has already been done.

Interviewer: What is your personal opinion of GT5?

Dan: Oh, I think it is a very good game. I’m a fan of the series. It is why I got into this business.

Interviewer: Do you think the feeling is mutual with Kazunori?

Dan: I assume so.

Interviewer: Getting back to the lack of racing features in Forza, will you be updating or adding them to FM5?

Dan: Um, (laughing) I don’t agree with your premise. Forza has all or most of the racing features you mentioned.

Interviewer: Not exactly. Yes, you do have pit stops, but they are computer controlled. You have tire wear, but without significant degradation. You have fuel consumption, but just barely, as though every car no matter the power or use of that power gets the same ridiculous mpg. You have damage repair, but only mechanical, and not on the aerodynamics. You have a drag tree, but it doesn’t actually function.

Dan: Fair points, but, but again, Forza (and Forza 5 in particular) offers so much more than these rather minor details and concerns from our niche brothers and sisters on the racing side of Forza life. We feel that the true source of Forza entertainment comes from its overall execution and the emotional connection derived from its unparalleled immersive content. I feel that any details that are allegedly missing are far outweighed by our cutting edge graphics and physics. But it’s not just these critical aspects; it’s also (in the case of FM5) the new power of the Cloud that places us on an entirely new plateau beyond anything anyone has out there. So, I think we can be forgiven if we don’t have every feature under the sun.

Interviewer: Well, speaking for the racers, we don’t really feel you have gone all out, or the extra mile when it comes to the racing features in Forza. The general opinion is that you did just enough to get by so that you can say you have this or that feature, but often totally lacking full functionality. Is this a limitation of the Microsoft hardware, architecture, or software, or is it a lack of racing experience and culture?

Dan: Okay then, tell me how you really feel! (laughing) Seriously, we could make a hardcore race sim, but that’s not what got us here. We can’t take the path that others with less success take; we have to forge our own path. And as much as we try to be everything to everyone whether they are a car guy or not, we can only go so deep with any single feature if you know what I mean.

Interviewer: Yes, I think I do. This is sort of the problem from the sim-racer point of view; and that is Forza isn’t precisely sure what it wants to be. It seems to have strayed far and wide from its original concept back in the day when everyone was quite sure that Forza was a racing simulator not unlike Gran Turismo. By not staying on point or with the original theme over the years, we’ve seen improvements in graphics, physics, GUI, and all sorts of non-racing innovations like the livery editor and auction house features, but very little actual improvements to the racing experience itself. Can you explain this?

Dan: Probably not to the satisfaction of the hardcore racers.

Interviewer: Well let me ask you this then, will racing ever become the preeminent attribute of Forza in the future? Will you ever return to your roots and make simulation racing the reason for Forza again?

Interviewer: Dan, I see our time is up, and I want thank you for this extended and rather unprecedented interview. I know I was a little tough on you, but you know how the racing community is. We may be your most passionate fans.

Dan: Oh I know. We take more heat from our hardcore racers than any other segment.

Interviewer: That being said, maybe you could cool the fires and offer the hardcore racers a little something extra this time around.

Dan: We always try to.

Interviewer: Well, again thanks for your time, and we will be watching.
Zum Vergrößern anklicken....