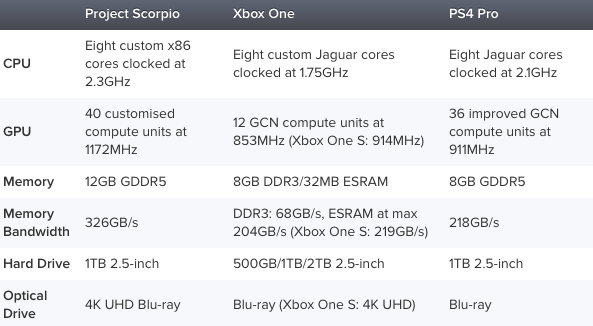 Microsoft's insistence on 1080p supersampling is actually more inclusive than it sounds, and it's good news for users of all screens. There have been instances of PS4 Pro games with higher performance 1080p modes only accessible if the front-end is set to a full HD output - No Man's Sky and The Last Guardian are two examples of this. If your Pro's set to 4K instead, you might never even know that an alternative, higher performing mode exists. With Scorpio, all game modes - resolution, performance or otherwise - must be available to all users regardless of the display the console is attached to. This philosophy reflects a long-held Digital Foundry view, and hopefully PS4 Pro titles will also follow suit.
Zum Vergrößern anklicken....

Did you see it running a game?

Yes. Well, a ForzaTech demo, which is a stress test based on the Forza Motorsport 6 engine, running the maximum number of cars around a track with dynamic weather and all the bells and whistles turned on.

How did it do?

Smashed it. At the same graphics quality settings as Xbox One, the demo ran at a full 4K resolution, at a perfect 60 frames per second. For Xbox One to do this at a standard HD resolution of 1080p uses about 90 per cent of that console's power. Scorpio was only using 60-70 per cent of its resources to run this demo. The graphics settings were then ramped up to the equivalent of the ultra settings on the PC game Forza Motorsport Apex, and Scorpio still didn't break a sweat.
Zum Vergrößern anklicken....

To cut a long story short, Microsoft is using a vapour chamber heat sink. It consists of a copper vessel that forms its basis, inside of which is ionised distilled water under vacuum. Heat is absorbed into the water, where it vapourises. The steam convects away from the hot spots and condenses on the heat sink fins. It's highly efficient - but the heat still needs to be expelled from the system and the standard axial fans used on prior Xbox hardware wouldn't cut the mustard.
Zum Vergrößern anklicken....


dark10x (John von Digital Foundry) auf Neogaf schrieb:
The Jaguar inclusion seems to be offset by some of the custom hardware they've included designed to handle certain DX12 operations - though we'll have to see how that pans out.

The things that really stood out to me are the forced 16x AF, forced v-sync (of some sort) and the inclusion of FreeSync/HDMI 2.1 adaptive refresh.
Zum Vergrößern anklicken....

"We built into the hardware the capability of overwriting all bilinear and all trilinear fetches to be anisotropic," Andrew Goossen reveals. "And then we've dialled up the anisotropic all the way up to max. All of our titles by default when you're running on Scorpio, they'll be full anisotropic."

Good quality texture filtering will make a big difference to a large number of Xbox One titles, where typically 4x anisotropic tends to be the balancing point chosen by developers. The leap to 16x, enforced at a system level by the back-compat engine, is a huge boon, especially in concert with the complete lack of screen-tear and smoother overall performance. More good news: this new feature extends to Xbox 360 games too
Zum Vergrößern anklicken....

Microsoft engineers have effectively made a hardware implementation of Direct X12, integrated directly into the GPU command processor. Draw call instructions on the CPU which would typically require thousands of instructions, are now reduced to just 11. Yes, 11. State changes that are also heavy on CPU are now cut down to just 9.
Microsoft tells me that this custom hardware alteration, should drop CPU rendering workload by HALF, on titles built on DX12 renderers. Games like Star Wars Battlefront, Battlefield 1, Gears of War 4, and the latest Forza titles, for example.
Zum Vergrößern anklicken....

“I’m not dismissing raw performance. I’m stating – as I have stated from the beginning – that the performance delta between the two platforms is not as great as the raw numbers lead the average consumer to believe. There are things about our system architecture not fully understood, and there are things about theirs as well, that bring the two systems into balance. ” says Penello. “People DO understand that Microsoft has some of the smartest graphics programmers IN THE WORLD. We CREATED DirectX, the standard API’s that everyone programs against. So while people laude Sony for their HW skills, do you really think we don’t know how to build a system optimized for maximizing graphics for programmers? Seriously?”

Penello says Sony has a long history of bragging about their hardware performance.

“There is no way we’re giving up a 30%+ advantage to Sony. And ANYONE who has seen both systems running could say there are great looking games on both systems. If there was really huge performance difference – it would be obvious,” says Penello. “I get a ton of hate for saying this – but it’s been the same EVERY generation. Sony claims more power, they did it with Cell, they did it with Emotion Engine, and they are doing it again. And, in the end, games on our system looked the same or better.”
Zum Vergrößern anklicken.... 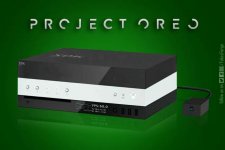